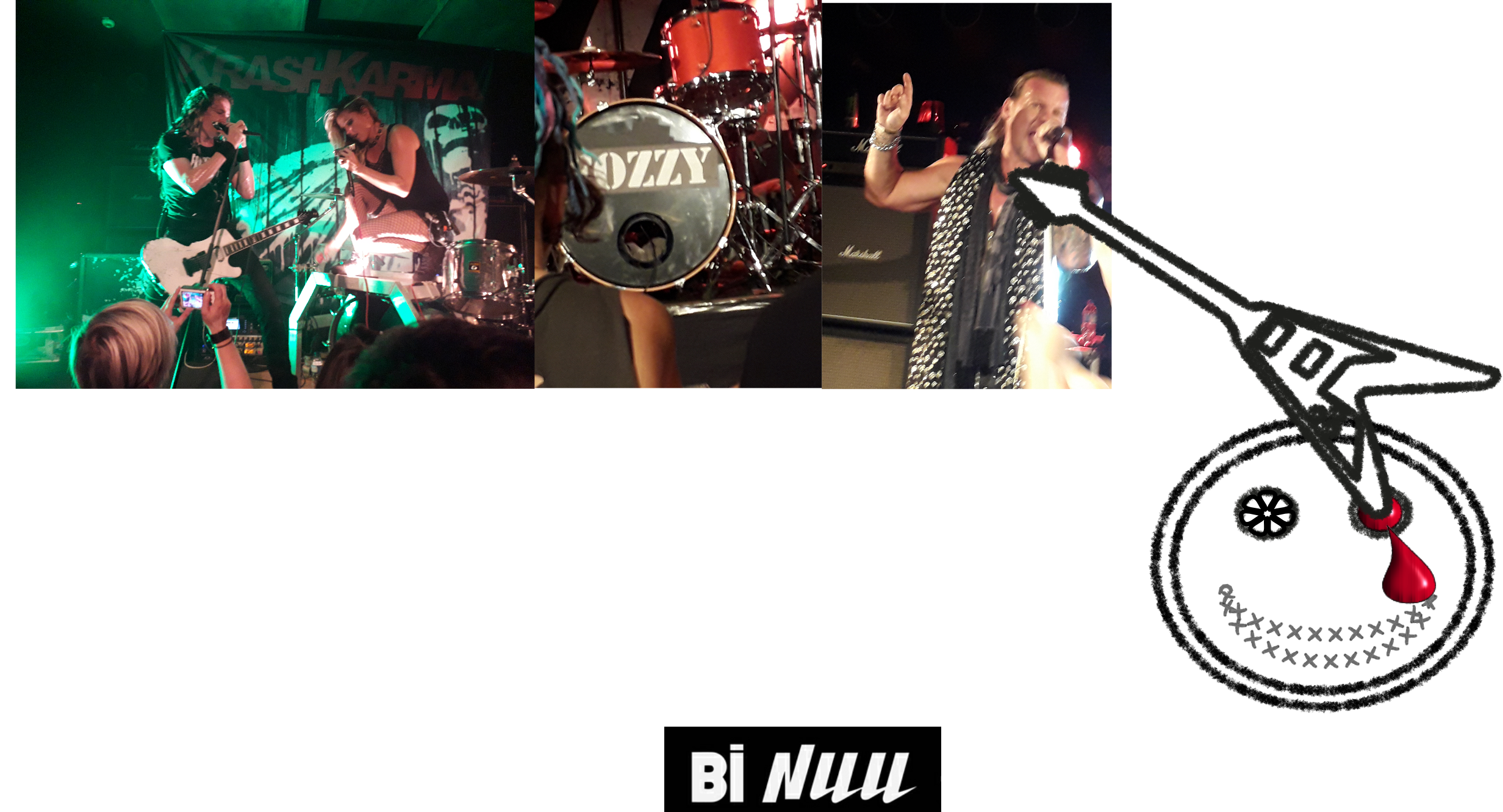 (Apologies in advance for pictures and videos. I was using my phone again. Not much memory and it felt like it was going to blow up. While recording the videos my phone kept stopping the recording so not as many full songs).

Overall what a night!

Bi Nuu: Is a fantastic venue, two bars and very big inside. The atmosphere was amazing and the drink selections were very good – for a gig the beer price was very reasonable, I though – €4.50 a pint (Or something not far off from that).

The place was packed and there was a great choice in background music to warm us up!

Considering there was only two of them, Krashkarma certainly got around during their performance. Entering through the main bar area, with portable drum kit, was quite good and different. They stayed in the crowd for a while.

They got on stage and they took it in turns to sing their songs. First was “Save Me”, see below.

Another was “Killing Time” (See below) – two songs I listened to on YouTube on the Thursday before.

They got back in the crowd, getting everyone to kneel down (A bit similar to Sumo Cyco) and played ‘Voodoo Dolls’ in the crowd kneeling down (The entire song, see below. I actually got a great position for this song).

They did their last few tracks, doing the ‘Who’s ready for Fozzy [Or next band] schtick.

Considering I didn’t know who was supporting Fozzy until the Thursday, KrashKarma were absolutely amazing and down-to-earth, as they were at the merch stand (Once Fozzy had finished, talking to fans, signing merch). It was just unfortunate that they were playing with Fozzy. I would definitely recommend them and I will be seeing them Live again. Hopefully, they have a great tour and come back to Europe/UK next year!

Beer break, listening to the background music whilst waiting for Fozzy.

If you would like to contribute with the names of the other songs KrashKarma played, please do. The Gigzter is all about sharing experiences. Better yet, why not sign-up and become a fellow Gigzter – writing your own reviews and share your gigs with the world!

Got me beer and the background songs faded as the room went dark. Smoke started as the band came onto stage, beginning with ‘Judas’. Jericho (As always, was the last to appear – this time with long hair, a scarf and a hat). The ‘Judas’ is song (and album) I can’t stop playing nor singing to my self (Don’t care what you think – on the bus, train or plane, so there!). It was great to see the song live and the crowd getting involved (Better atmosphere than The Asylum). Towards the end though, my phone decided it had had enough and decided to screw with me – which is why my videos and pictures aren’t really that good for Fozzy. (Not that they are good anyway, but still…the band I actually came to see and I couldn’t get the songs I wanted – BASTARD!!!).

Next was another song I wanted to record ‘Drinkin’ With Jesus’ – awesome song and even better live. The third song was from ‘Do You Wanna Start A War’ (Be gentle, but I kinda skipped this album – went from ‘Sin and Bones’ to ‘Judas’. The song was ‘One Crazed Anarchist’ – good song. They played ‘Sin and Bones’ and another epic from ‘Judas’ – ‘Burn Me Out’ – they let some fans on the stage for this one – fantastic! Rich Ward, got in the crowd – just in front of where I was. Similar to Skye, from Sumo Cyco, but obviously not as good looking  (Video below).

‘Painless’ was played next, before a little stoppage and blackout. Then the light-up jacket returned (with Jericho wearing it) – playing ‘Spider In My Mouth’.

One of my (Many) favourites from ‘Judas’ was next – ‘Elevator’, followed by a song I thought was ballsy (especially in Berlin, of all places) – ‘Do You Wanna Start A War’. Got to mention the war twice, thanks to this song! AND I got away with it! (Fawlty Towers joke). I was hoping for ‘Storm The Beaches’ as well!

Next was an ABBA cover ‘SOS’ – was wondering who sung the original at first, but found out the next day – that’s twice now I haven’t clicked who the band is coving. The first was (the first time I saw them) Sumo Cyco and ‘Give It Away’ – I was kicking myself for not realising who they were covering! Fozzy nailed this one! Better than the original! Sorry ABBA fans.

As the show neared it’s finish they played ‘Lights Go Out’, ‘Wolves At Bay’, then they turned to an old favourite AND still a great song in ‘Enemy’ – they paused during this to name each band member (Which was a nice touch, haven’t seem them do that before, although I have only seen them twice before. One when they toured with Drowning Pool, the other when they headlined with Sumo Cyco, in Chester – and I had to leave at 10.30pm to catch the last train). Jericho played to the crowd for bit, hiding his head under a towel, to get a good response for one more song. They finished off a truly fantastic gig with ‘Bad Tattoo’.

Just like the last two times I’ve seen Fozzy live, they do something new and are entertaining. Great songs and a great atmosphere. The Berlin crowd was into both bands (mainly Fozzy) and surprisingly no one started acting like tits and trying to start a mosh pit. The crowd had a good time, getting into the songs – more livelier than Birmingham. I would definitely go back to the Bi Nuu.

Good luck to Fozzy, down under in October/November/December (Around that time). I’d love to go back to Sydney to watch them, but I’ve got a double header, back-to-back gigs with Sumo Cyco in Manchester and (For the first time) Liverpool! December can’t come sooner!

Again, sorry for the poor quality pictures and videos. Next time, I’ll look to bring a proper camcorder – or I may even do a Live stream of one of Sumo Cyco’s songs? The photo gallery is at the bottom.

Hope you enjoyed the review. I’ll try and do better with the next one – but if it’s for a band I like, don’t count on it! I’ll be too engrossed in atmosphere!

Thanks again, for reading and see you all soon! Like in December! Or don’t forget, if anyone is going to any gigs, in the meantime, sign-up and do a Gigzter report and share your experiences!

(As explained above the image in the gallery below are not that good partly due to where I was standing and partly due to the fact that I am not a bloody photographer! Hopefully this is a one-off as I do normally get (and stay) at the front so my next gig should feature better pictures and videos!)